​I am pleased to introduce you to my first piece of a new series ‘representing numbers’ in honour of the De Stijl Movement … a celebration of 100 years ago!    Among the pioneering exponents of abstract art, De Stijl artists espoused a visual language consisting of precisely rendered geometric forms - usually straight lines, squares, and rectangles.. and primary colours (red / yellow / blue) expressing the artists' search "for the universal, as the individual, was losing its significance," this new language was meant to reveal the laws governing the harmony of the world.

This 'series of ten pieces' is a tribute to the works of Mondrian, Reitveld, van Eesteren, Oud, van Doesburg and others.
‘painted dreams'   #240
shadow box - recycled paper
30cmx30cmx5cm April 14 / 22
studioDB3, Comox BC 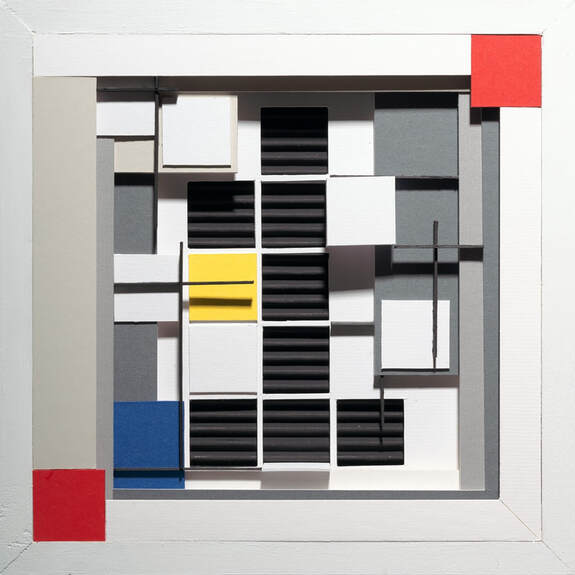 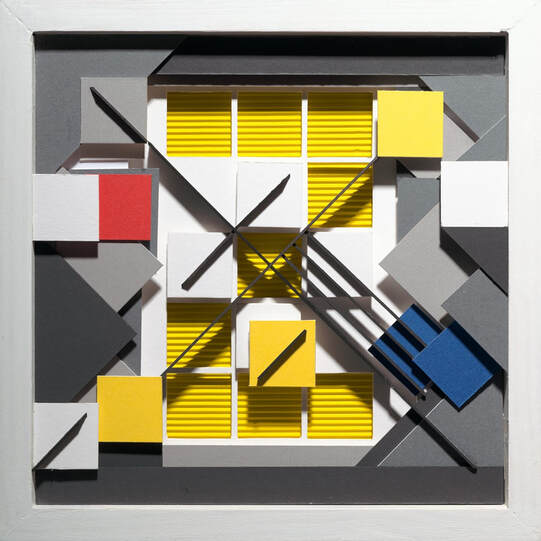 ​red, blue and yellow of de stijl' ... three primary colors of De Stijl
represents an evolution of colour and places where people dwell.

This era marks an extraordinary milestone for the Netherlands: the 100th anniversary of the founding of the art movement De Stijl. De Stijl artists sought to reduce visual composition to its most basic elements in order to express universalities. They defined those basic elements as horizontal and vertical lines and a simplified palette consisting of only black, white, and primary colors: red, yellow and blue. The De Stijl movement resulted in one of the most influential abstract aesthetic positions of the 20th Century, and its principals and theories remain influential to many artists, designers and architects today.

De Stijl-inspired architecture, particularly by Rietveld and Oud, was built in the Netherlands throughout the 1920s, all of which, interestingly enough, seemed to defy van Doesburg's theory of Elementarism, instead utilizing clearly defined horizontal and vertical lines. De Stijl also had a major influence on Bauhaus architecture and design; several members of De Stijl taught at the Bauhaus, perhaps most importantly van Doesburg, who lectured there in 1921-22. De Stijl's geometric visual language, along with its architectural concepts such as form following function and the emphasis on structural components, would reverberate in Bauhaus architectural practice, as well as the global idiom known as the "International Style." 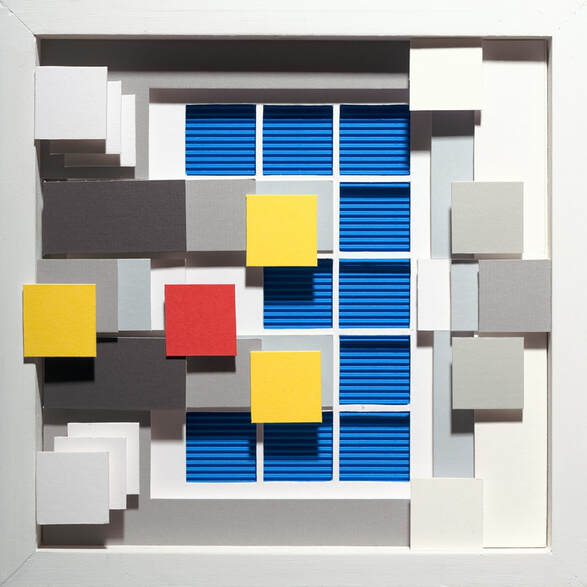 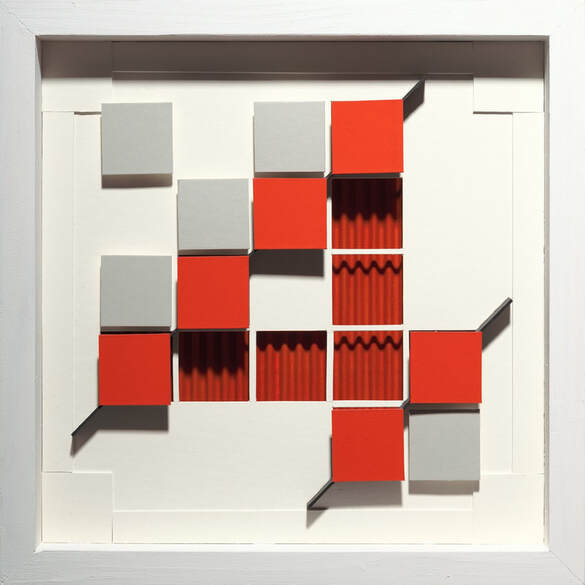 time - to give thanks to those who sacrificed
to let our breath, not be drained 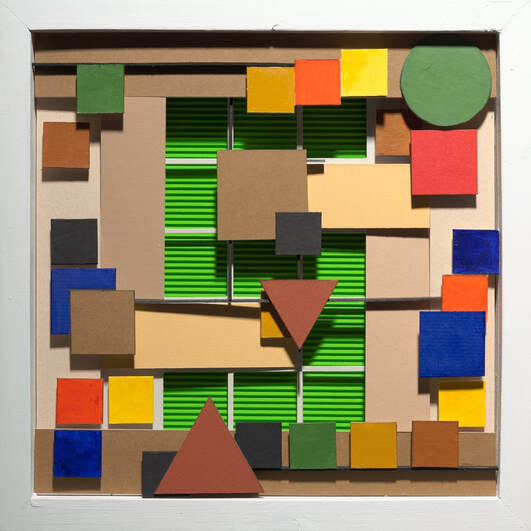 ​De Stijl / Bauhaus… and the elements of colour both primary and secondary colours in a celebration of 100 years!
From the Netherlands, De Stijl is one of the most recognizable styles in all of modern art. Consisting only of horizontal and vertical lines and the colors red, yellow, blue, black, and white, De Stijl was applied not only to easel painting but also to architecture and a broad range of designed objects from furniture to clothing. Despite its close association with Piet Mondrian, the artist thought of it not as his personal style, but as De Stijl, it was objective and universal, applicable to all people and all things.

The Bauhaus on the other hand, was an art and design school in Germany whose importance is astonishing given its very brief and tenuous existence. During its fourteen years of existence the Bauhaus was forced to change location three times and was ultimately closed as a result of political pressure from the Nazi party. Founded by Walter Gropius in 1919, the school originally had three aims: to abolish the “arrogant” distinction between artist and craftsperson by recognizing the knowledge and skills common to both; to mobilize all arts and crafts towards the creation of total design environments; and, to foster links between the school and local manufacturers utilizing basic forms of a triangle, circle and square.

It helps to think of the colour elements of De Stijl as building-blocks: structural components that, in different combinations, can be used to make everything in the universe. Take for example De Stijl’s limited palette of red, yellow, and blue. These are what are called the “primary” colors, because if you had perfectly pure versions of each of these colours, you could create every other color. Red + yellow in different proportions create every shade of orange; blue + yellow create the shades of green; blue + orange create brown, and so on. Similarly, by combining black and white, you can make every shade of grey in between.
'pink blossoms in flight'
#246   series - shadow box - recycled paper
30cmx30cmx5cm April 24, 2022   studioDB3, Comox BC 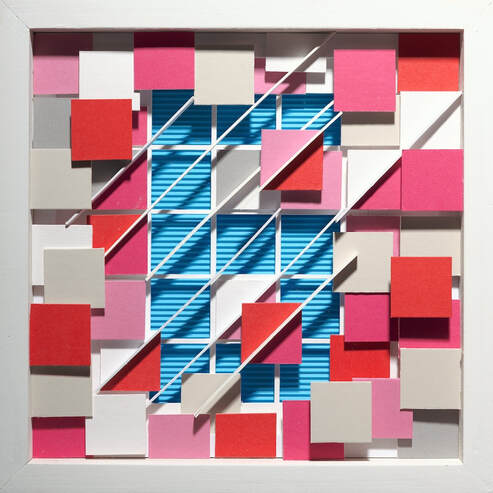 ​pink blossoms in flight
brightened our walks each spring
on paths along a pasture or a pond
you proudly enhance a promenade
yet subtle and without any order
you fall so gentle like, sublime
snow-flakes fall on a bridal veil
innocently you cross borders
and neighbourhood fences
you cover all the cracks
and the gutters of our mind
you can even soften
the hardest of hearts
you are like a résurrection
tossed in storms, our tears released
where every shade of gray
is overcome by your aroma
your majestic abundance
an aroma of scented
pink blossoms in flight! 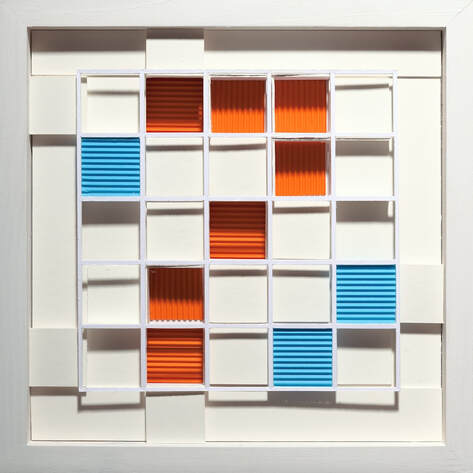 ​I have spent my whole career I the architectural design realms using numbers and proportions
… it is time to celebrate numbers!

Number Seven sparks a whole new ethos. Whether you like it or not, we are all surrounded and influenced by the number seven. I was born into a family with seven sisters!! … my Seven Wonders of the World!  By making interconnections and utilizing our alphabet and numbers, we became connected; we have a need to belong in our imagination and to be anchored in our memory. 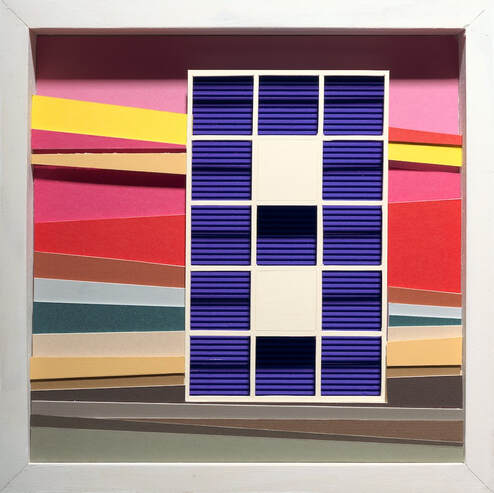 ​Treaty 8  ... represents a time for transparency in reconciliation
justice for all, in our democracy.  Whereby democracies are to be passed on in our social fabric within the sphere of human relations in a meaningful collaboration and forgiveness.
Treaty 8 was signed on 21 June 1899 by the Crown and First Nations of the Lesser Slave Lake area. The treaty covers roughly 841,487.137 km2 of what was formerly the North-West Territories and British Columbia, and now includes northern Alberta, northwest Saskatchewan, and portions of the modern Northwest Territories and BC, making it the largest treaty by area in the history of Canada.

Historical Context ...during the late 1800s and early 1900s, the Canadian government negotiated treaties with Indigenous peoples as a means of “extinguishing” (surrendering) Aboriginal title to traditional territories. The government wanted these lands for use in settlement and development projects. Certain parts of Canada, however, such as vast portions of the North, were not considered as valuable as other regions, namely the plains, because they were not generally suitable for farming or settlement. The government was therefore reluctant to make treaties with northern Indigenous groups. As Superintendent General of Indian Affairs Thomas White remarked in 1887, “Within this vast region the Indians are not very numerous… the parts that have been explored are reported to be for the most part unsuitable for agriculture". 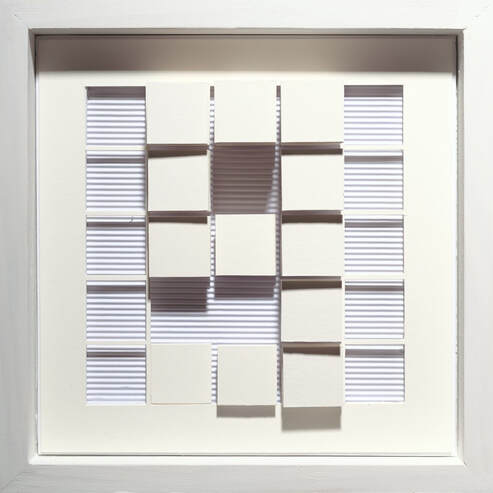 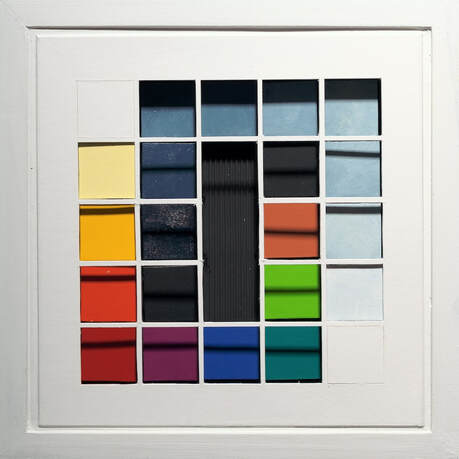